No matter the size of the town, by the early 70s, police wanted in on that sweet sweet fogger action. The Brigham City (Utah; 1970 pop. 14,007; USCB (1971)) Police Department leveraged federal Omnibus Crime Act money to purchase a variety of weapons to use against protesters in 1971 (Box Elder Agencies 1971).

emits a continuous stream of smoke, chemical irritants, or whatever solution is fed into it. [emphasis added]

Use of federal funds to purchase chemical weapons, and specifically foggers, was not limited to one department. Cities, counties, and states across the country used Omnibus Crime Bill money to up their chemical weapons caches, including foggers (Conheim 1972). For example, Oakland County in Michigan (1970 pop. 907,871; USCB (1971)) purchased two pepper foggers for their South County Tactical Mobile Unit with part of their $21,066 in 1970 (Conheim 1972).

Oneota New York (1970 pop. 16,030; USCB (1971)) purchased a fogger in 1969 during the anti-war demonstrations, although the department bungled its response to protests (Griffin 1973). As came to light during a public probe, Oneota Police Chief Joseph F. DeSalvatore requested a limited amount of training in the budget, and officers were therefore unable to deploy the fogger or other chemical weapons (Griffin 1973).

Gaston County North Caolina (1970 pop. 47,322; USCB (1971)) Sheriffs purchased a fogger, which they turned on but not used to dispense agents multiple times by 1970 in their jail system “when there’s been trouble brewing” (The Gastonian Gazette Sun 1970a). 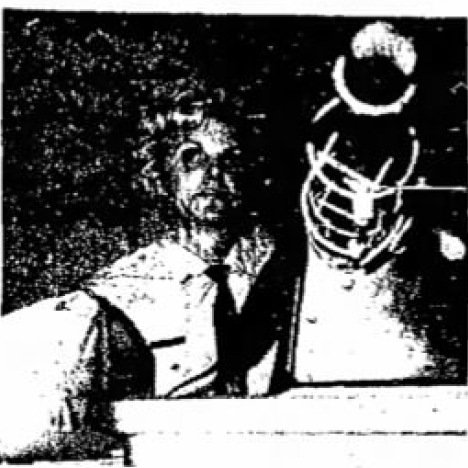 Apparently the threat of death by chemical weapons fog is sufficient to scare detained individuals into compliance.