1.1 The Science of Thermal Fogging

Broadly speaking, a fog is a visible aerosol that hangs in the air near the ground, and while it occurs on its own accord, humans have devised a variety of methods to generate fog. And many, if not all, of those methods have been used to deploy chemical weapons on people. The focus of this book is on thermal fogging. The idea behind thermal fogging is the same whether you’re targeting mosquitoes in a marsh or protesters on a street: flash-vaporize a liquid being forced into a stream of cooler air, causing a fog to form as it condenses; move to increase the size of the cloud.

The original chemical weapons thermal foggers employed the exhaust lines of diesel trucks or manifolds of 2-cycle engines to heat the formulation, which worked but were bulky and difficult to control in open areas (Crockett 1969). These models were quickly supplanted by foggers leveraging resonant pulsejet technology that were streamlined, lighter, and gave control of the stream to the operator (Applegate 1969) 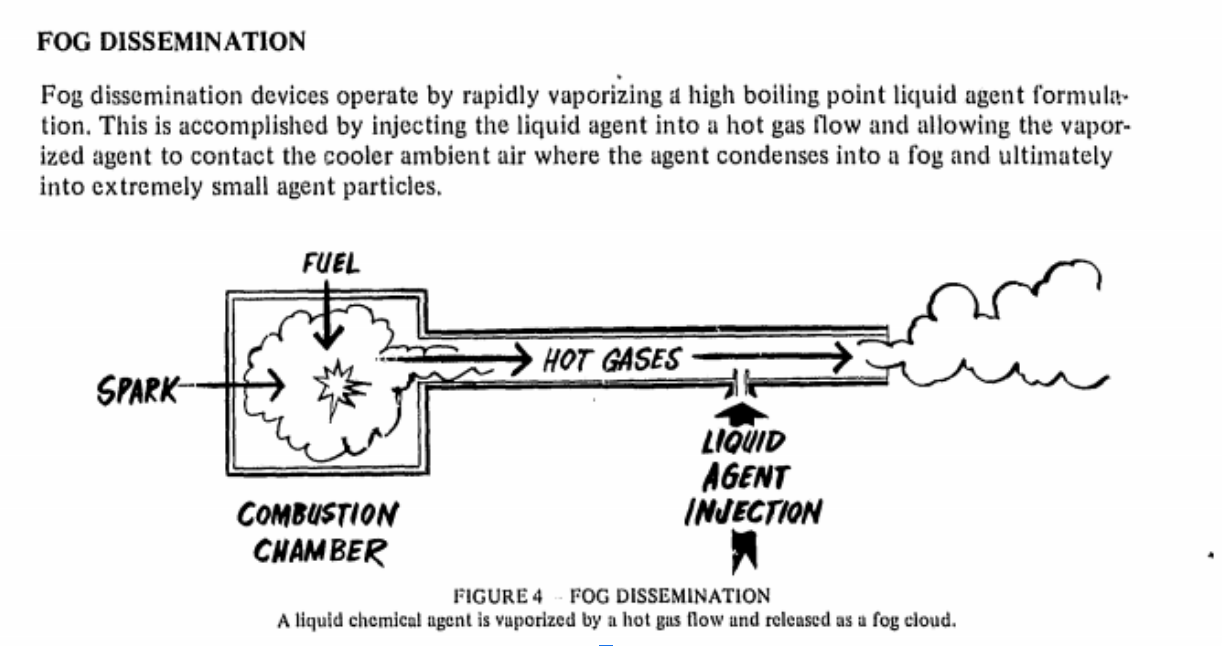 Regardless of the heating method specifics, the machine creates a visible fog from the mixture of gasoline exhaust, chemical weapons, and ambient air moisture, as desired.

Although the mixture does cool considerably from its peak temperature before being released, the chemicals are heated to such high temperatures that they thermally decompose, creating a much more toxic mixture of gases that condense to form the fog. Indeed, the thermal cracking temperatures of common chemical contemporary chemical weapons are well below the temperatures achieved in a thermal fogger:

As a result, it is impossible for anyone to definitively know what chemicals they are fogging someone with, but it is fair to say the mixtures are likely to have considerably higher toxicities than product labels and safety sheets indicate, which are already concerning (Defense Technology 2015).