Later that month, from August 26th to 29th, anti-war protests took place in Chicago, Illinois during the Democratic National Convention, and a massive force of law enforcement (Chicago Police with assistance from over 6,000 National Guard members and 6,000 Army troops (Taylor and Morris 2018)) responded excessively, including with chemical weapons, on network news (Schultz 1969, Karnow 1983, Farber 1988, Langguth 2000). After four days, hundreds had been given medical assistance for exposure to chemical weapons (Taylor and Morris 2018).

Although I have yet to find contemporary documentation of fogger use during the convention, an AP report on fogger use in Berkeley the year later states

A similar device was used during demonstrations in Chicago during the Democratic convention last summer. - Associated Press (1969a)

As such, I consider this a very likely deployment. I am continuing to search for evidence.

An August 31st demonstration in Berkeley, California was called by the Young Socialist Alliance, Independent Socialist Club, and the Black Panther Party in solidarity with anti-war protesters in Chicago who the police had recently brutalized (United Press International 1968a, 1968b), including use of a pepper fogger (Associated Press 1969a). In response, police brutalized the protesters, and in the process brought out a hand-held pepper fogger, a “new police weapon… which produced a gas that caused sneezing” (United Press International 1968a). 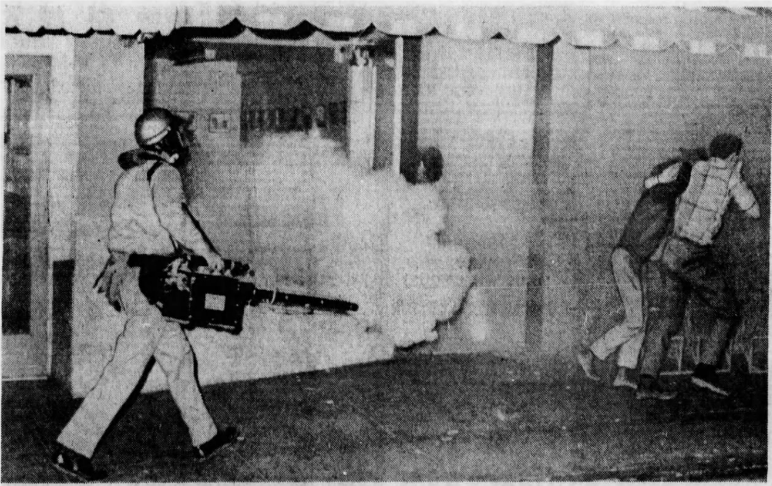 It is clear from the photograph shared with the United Press International (UPI) copy that the fogger used is a GOEC brand pepper fogger, which hit the market the month prior (USTPO 2018). The GOEC thermal fogger was so new, it would not have a trademarked name (“Pepper Fog”) for another year (USTPO 2018).